".. During a recent breakfast with an investor visiting Mumbai from a large western fund, the conversation quickly turned to the question of the moment: what ails India?. “On every indicator we look at, there is a red flag,” he said, before adding with a wry smile: “This country is close to becoming the Greece of Asia.”.. " - James Crabtree, The Financial Times, May 15, 2012.

Ever since the Sovereign Debt Crisis in Europe, it has been difficult times for the Indian Economy. Dr. Kaushik Basu, the Chief Economic Advisor to the Government of India, in a recent interview with journalist Karan Thapar admitted that "Its not a pretty picture". A recent article that came in 'The Economist' said "Farewell to Incredible India" (June 9, 2012). The GDP has fallen to 5.3%, the IIP growth rate has slowed down to 0.1%, Inflation rate still lingering around 9%, the Rupee has fallen to 57 per $, the Unemployment is as high as 9.4%, the Net International liability at $244.8 billion (20% hike), Government borrowing as high as Rs. 53000 Crores, burgeoning Fiscal deficits and the declining FIIs to top it up, the picture is clearly not pretty. But are these the inevitable resultants of the Global Financial turmoil or are there any other possible angles to it?

I wish to discuss on three observations I had made on the recent events in our economy.

One, the prices of petrol was hiked overnight by Rs 8, there by crossing the Rs.70 mark, in the name of decreasing Fiscal deficit to the targeted 5.1% viz reducing subsidies. But on the other hand Government gave Customs duty exemptions on gold and diamonds. We have a 967 tonnes of gold imports in this country and  would mean that the Country is set to lose close to Rs 50000 cr from these tax exemptions. Not just that, if the CAG report has to be believed, Rs 80000 cr revenue was forgone from tax exemptions in corporate sector alone, out of the Rs. 1,60,000 cr tax forgone in the recent budget. Why the Government chose not to tax the Gold - Diamond merchants to help in achieving the Fiscal deficit target, but instead taxed the common man of this country taking money out of his already shrunk pocket? It could only be called as an economic paradox!

Two, at a time when the country was strangled with 9% inflation, last season, India harvested a bumper crop of grain, an all time record of 75 million tonnes. But food grains worth hundreds of crores of Rupees went rotting in the FCI godowns in Rajastan. The Supreme Court of India observed that, “In a country where admittedly people are starving, it is a crime to waste even a single grain” to which our Prime Minister had replied that Supreme Court should not interfere itself in the matter of policy decisions. I wonder what would have prevented The government of India from distributing the excess grains through the Public Distribution System (PDS) at BPL prices which would have brought the inflation rate down? 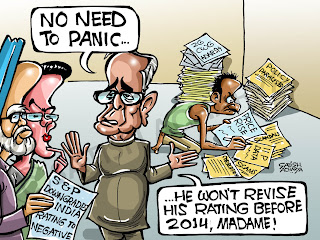 Three, in a country which has 1/3 of world's poor, where millions survive on less than $2 a day, where 41% population live below poverty line, 40 mn living in slums, 3 mn sex workers, 12.6 mn child labors, 72 mn children without primary education, 2nd largest population of mal-nutritioned children with 4 children dying every min prone to illness, 20 cr sleeping hungry every night, 18000 farmers committing suicides an year and 35% of population living without electricity - the Government of India spend $80 million on Chandrayaan 1 for collecting rock samples and to find traces of water on moon surface! Chandrayaan which was supposedly a two year project, had to be called off after a mere 312 days. I wish had the Government concentrated more on building basic infrastructure, like building more storage facility for food grains, building better roads, providing water supply facilities, rather than going to moon and search for the possibility of water traces, would have helped in the country and its poor majority people in these difficult times.

From the above three observations, it gets pretty clear that for the situation India is in now, the policies of the Government of India is equally responsible along with the unfortunate world economic situation. With no major reforms going on and those promised - The Banking,Pension & Insurance(BPI) Reforms Bill, the FDI in Retail, the Goods and Services Tax (GST), the General Tax Code (GTC) - still on hold, the Government is going through a severe policy paralysis. On top of this, the untimely announcement by the Government of India for the retrospective amendment of tax and General Anti - Avoidance Rule (GAAR) to prevent the entry of money through the Mauritius route, has lead to lack of confidence of investors on India and resulted in the flight of capital from India, which in turn has caused the unprecedented downfall of Rupee. If the words of Dr. Kaushik Basu could be believed then there is no scope for any big ticket policy measures from the UPA-II Government till 2014, which means things could go worse. Thus the dirty picture we are seeing of our Economy in the recent times cannot be solely blamed on the turbulance in the World Economy but is also a case of economic mismanagement and still on going policy paralysis of the UPA-II Government. Its time for the Government to wake up and invoke the 'animal spirits' in the Economy, through strong and credible policy decisions otherwise India's wonder story will be over before we even reach 2020.
Posted by Dr Vineeth Mohandas at 11:44 AM