The Genesis of European Economic Crisis and its Impacts on India

The fear of an economic crisis arising from the burgeoning sovereign debts in some of the European countries developed during the late half of 2009 and this fear turned to a reality in the early half of 2010 that took the shape of what we know today as the European Sovereign Debt Crisis. Sovereign debt crisis means that the sovereign government’s borrowing from the domestic and external markets is in excess of its capacity to repay, resulting in loan defaults. In such situation the countries under trouble will require bailout packages from other countries or institutions such as IMF.
The countries caught up in this crisis were Portugal, Italy, Greece and Spain (known as PIGS). The economic activities of these countries came under the intense scrutiny from the international investment community, in the early 2010, with the threat of Sovereign default lurking around the corner. The crisis occurred as an aftermath of the Global Recession. The European governments had to introduce various financial stimulus packages to confront the recession. The Government expenditure on public job creation, pensions, social benefits etc in these countries took gargantuan proportions to support these packages. Governments were forced to borrow heavily to support these financial stimulus packages, generating high fiscal deficits. The government of PIGS nations, in the panic of recession, thus mopped up huge debt.

The Genesis of the Crisis

Greece was the epicenter of the crisis. The shambolic state of affairs in Greece, which was known to ‘live beyond its means’, was the major reason behind the crisis. The successive Governments in Greece till 2008 resorted to high Government spending which led to the situation of high budget and current account deficits. But the Governments concealed the real situation by manipulating with its deficit figures. From 2001 to 2008, the reported budget deficit of Greece averaged 5% per year and the current account deficit averaged at 9% per year. Several international rating agencies mislead the international community by high rating the Greek bonds.

But soon the world came to know about the real condition of the Greek economy. The new socialist government in Greece, led by Prime Minister George Papandreou released the revised estimates of the Government Budget Deficit during late 2009. The revised estimates showed the budget deficit to be a whopping 12.7% of the GDP, when the previous estimate was only 6.7% of GDP. Greece held external debt to the tune of $236 billion and was unable to continue making their interest payments. Subsequently three major credit rating agencies downgraded the Greek  bonds and investors lost their confidence on Greek economy. A $1 trillion rescue package from the EU and the IMF was agreed upon in Brussels in May 2010.
Greece was not alone in this quagmire. The situations of other European economies like Italy, Portugal and Spain also surfaced. All these countries faced a roll-over risk. That is they had debts mainly comprising of short term maturity, and hence the amount to be rolled over was large, that aggravated the crisis.
Consequences
The crisis considerably affected the growth of the PIGS countries. The GDP of all the PIGS countries showed a steady decline from 2009 to 2011.
The GDP (in $ bn) of the PIGS countries from 2005-2011

Being the common currency for the entire European Union, the debt crisis had immediate impact on the Euro. The value of Euro fell drastically since 2009. Most of the Currency traders feared that some Exchange Rate countries with large budget deficits might be tempted to leave Euro. If it happens, that is if a country leaves the European Union, it could allow its currency to fall in value and there by improve their monetary situation. But it would cause huge ruptures in the financial markets as the investors would fear other nations might follow this and it could potentially lead to the breakup of the European Union itself.
U.S. / Euro Foreign Exchange Rate 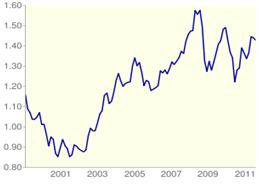 The steady fall in the Euro and the weakening dollar due to the Global recession and the fear of a possible double-dip recession in U.S. all directly affected the gold prices. Investors saw Gold as a safer investment in this difficult economic situation and hence started to invest on gold. The high demand for gold resulted in a hike in the Gold price. The average gold price went up steadily since 2008 and this hike got accelerated since 2009 when the crisis in Europe was revealed. 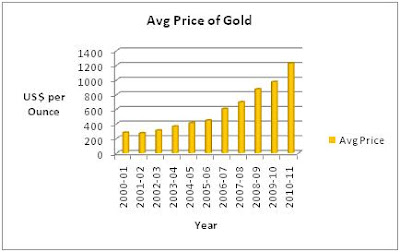 The Greek crisis has also affected the Global banking system, as many of the Global major banks had invested in the Debt instruments issued by the Greece government. This ultimately affected the ordinary investors or the people who own their shares through pension funds. It also affected the common tax payers of the other Euro zone countries, as they have agreed to help the countries in crisis and hence the tax payers of these countries have to pay more taxes in order to share a part of Greece’s burden.

Impact of the Crisis on India

India has out-performed other economies during this period of crisis. The major reason for this is that the Indian economy is not much exposed to the European economy as it is to the U.S. economy. Indian economy is far less dependent on its trade with Europe. Indian IT companies have lower exposure to European clients and hence were not majorly affected by the crisis. The software receipts were $11.3 billion in Apr-Jun 2008 which came down only to $10.6 billion which is very less as compared with the impact crisis had on IT in other economies To understand the real impact of the European debt crisis on the Indian Economy, we need to check the major Macro Economic indicators of India and see if there were any significant impacts on it during the period of the crisis.

The Sovereign debt crisis in Europe did not have much impact on the growth rate of India. The Indian economy continued to grow even during the crisis period. The indicators of growth, the Index of Industrial Production (IIP) and the Gross Domestic Product (GDP) did not show any decline during the period of the crisis, i.e. from 2009 onwards.

The European Union accounts for nearly 21% of India’s total export and out of that the exports to Greece, Spain, Portugal and Italy constitute only 4%. Since the Indian exports to PIGS are very low, the crisis did not have any impact on it. India’s major exports to EU are textiles, pharmacy products, gems which were not much affected by the crisis. Hence neither the Exports nor the imports show any decline during the crisis period from 2009, showing no impact of the crisis on India’s Trade.

The international investors lost their trust on the European economy owing to the crisis and hence majority of the FII and other individual investors chose Indian market to invest as it showed stability in the economy even at the adverse time of the crisis. The Foreign Direct and Portfolio investments showed a steady rise since 2008-09 and continued its rise in 2009-10. Though there was a dip in the Portfolio investments in India at the time of the Global recession but it is notable that the Direct Investments was stable throughout the period. 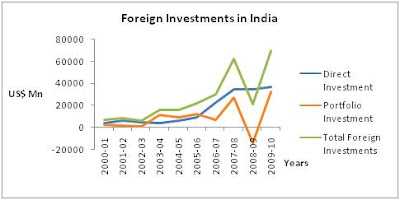 Impact on the Forex Reserves

India is sitting comfortably on a high Forex reserve that could absorb any shock from outside on the Indian economy. It could be seen that there was a dip in the Forex reserves of India at the time of the Global recession. But during the period of the European Crisis, the Forex reserves were steady and showed an upward trend. 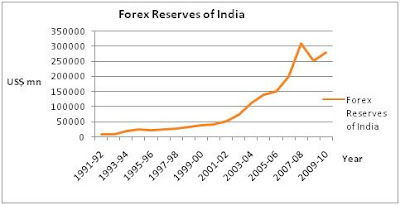 The European economic crisis was a Government driven crisis than a market failure. It occurred due to the shambolic state of affairs that existed in European countries, the extravagant Government spending and abysmal management of funds. The Governments were found to be in a quandary at the time when the crisis emerged. Hence the Governments tried to manipulate with the numbers to hide the reality. This took long time for the world to understand the real situation. This highly condemnable act of the Governments to hide the reality about their true economic situation has raised serious questions about ethics in economics.
The investment agencies also played a part in misleading the investors into investing in the government bonds of Greece. Greece and Europe was majorly hit because good part of the Government debt was held by foreign institutions. On top of that, all these countries faced a roll-over risk as they had debts mainly comprising of short term maturity, and hence the amount to be rolled over was large.
Though the crisis had a major impact on the world economy, it could not cause much an impact on the Indian economy. The major reasons Indian economy has not had a direct impact of the crisis are the fewer linkages it has with European economy and the highly cautious approach that the Indian monetary authorities have shown in managing the economy right from the time of the Global Recession. Hence the economic growth, the foreign trade, the foreign investments and the Forex reserves of India did not show any signs of decline during the crisis period. The better performance of the Indian economy has increased the belief of the investors on the stability of the Indian economy, which was evident in the steady rise in the Investment inflows into the country at the time of the European economic crisis. Hence the crisis has only provided an opportunity to India in proving its economic stability and credibility.
The lessons learned from the European Debt Crisis are the following:
Thus Governments, Investment agencies, Credit rating agencies all have to maintain economic prudence otherwise the price for any mismanagement from them have to be paid by the common man.